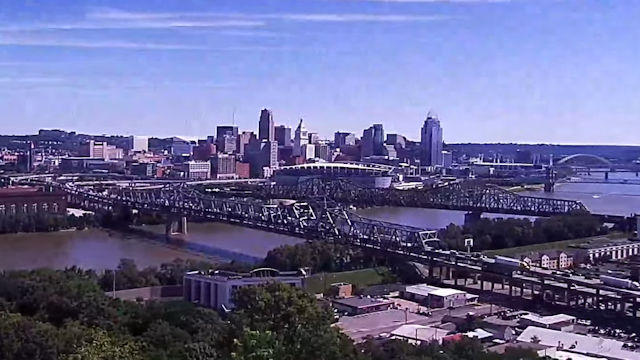 Watch this webcam of the Cincinnati skyline streamed by CincyVision and you’ll soon realise there’s one thing this city isn’t short of and that’s bridges.

Cincinnati was founded on the banks of the Ohio River way back in the late 18th century and it seems they’ve been building bridges pretty much non-stop ever since. The city’s oldest bridge, the John A. Roebling suspension bridge, was once the longest in the world, but that’s a title that’s long since been stolen from it. Considering its age, it’s still a good looking bridge though and even better when it’s illuminated at night. Wait until it’s dark, look past the boring lattice metalwork of the Brent Spence Bridge and the Clay Wade Bailey Bridge and you’ll glimpse its towers in the distance downriver.